Growing up, I was never taught anything about being nonbinary in the news. Being nonbinary, the world puts you in a box. So, it’s either you are male or female. And this made me feel never at home in my body.

Pride parades were the gateway into mainstream media, says Ken Hickling, senior process and privacy director at Pink Triangle Press, which publishes Xtra, an online 2SLGBTQIA+ magazine. The first Pride parade was held on June 28, 1970, in New York City, to commemorate the Stonewall Inn riots the year before. Stonewall was a series of protests in response to a raid in which police officers beat people at a gay bar in Greenwich Village. Following this onslaught, Pride parades occurred in many cities and, eventually, turned into celebrations at which businesses could advertise and promote their products and services. Absolut Vodka began marketing to lesbian and gay communities in 1981. “We can’t lose sight of the fact that marketing changes perceptions,” says Hickling. “Yeah, sure, [Absolut Vodka] is there to make money, but they could make money somewhere else. There was a lot of bravery,” he says.

Then along came social media, basically news media for the younger crowd: Instagram, Twitter, TikTok, YouTube, and, with it, algorithms. They helped young people see their real selves reflected more often, as a 2013 article in The Huffington Post noted. Titled “The Social Media Effect: Are You Really Who You Portray Online?” the article suggests that “The question we have to ask ourselves is: Are we really presenting who we are or are we presenting a hyper-idealistic version of ourselves?” The following interviews help to demonstrate the many inner battles 2SLGBTQIA+ people continue to face. “As a press, we tend to not evolve as quickly with the alphabet,” says Hickling. “We started back in the seventies and the only word that was really used was ‘gay’ and we were ‘Canada’s gay press.’ Late in the eighties, we added ‘lesbian,’ and in the nineties, it was ‘LGBTQ.’ It wasn’t until about five years ago where we really updated our mission statement to be ‘LGBTQ2S+,’” he says.

While straight media are finally working to publish work that properly represents the 2SLGBTQIA+ community, Xtra helps journalists understand that gender is fluid, as well as the importance of keeping up with the changes, says Hickling. “In a specific instance, Xtra created relationships with mainstream media on how to write about LGBTQ2S+ communities, like language and pronouns, to help them understand. On a couple of occasions, Xtra has had people coming to us asking for help.”

I had the opportunity to interview a few 2SLGBTQIA+ people. In their early-to-mid-twenties, each person has had an experience of representation in the media. They offer insight into how they think news sources report on 2SLGBTQIA+ topics. They also shed light on why queer communities trust social media influencers more than they do journalists, and how newspapers and magazines can build a trusting relationship with the 2SLGBTQIA+ community.

Where I grew up, I never saw queer people in real life. I grew up in a very conservative, religious area and it never crossed my mind that I could be gay. If I saw anyone who was lesbian, it was through a man’s perspective. Like hypersexual performative lesbianism, and always teenagers and young adults. So I thought even if I was lesbian, it’s probably just dabbling. Even in the news publications growing up, I found the community lacked LGBTQ2S+ voices. I am lucky to have a loud mouth and confidence, because now my partner, Fran, and I are able to be that figure for someone else. I found two things on Instagram that made me feel like I belonged. The first was a woman who is married to another woman, a surgeon, and a mother, and I never thought I could be all three. I always thought it was one or the other.

The other thing is gay wedding photography and it’s funny because, still, some venues do not offer their space to gay marriages. People can’t imagine us sharing the chores, and it’s important for the media to emphasize, “Lesbians, they are just like us.” We are more emotional because we are both on our period at the same time, like, “You stole my jeans,” or, “You used the last of the serum!” I just wish we could fast forward through the shoving-Pride-in-people’s-faces stage and, instead, have it where being gay is as irrelevant to a story as being straight is.

Two years ago, I saw a comic strip on Instagram, which is where I get most of my news. It was one cartoon talking to another and it said, “If you are questioning your gender identity and you are wondering if you are nonbinary then you probably are, because cis people don’t ask themselves this.” This made me realize there is no limit on who I can be and what I can do. Obviously, I feel more masculine, but I also don’t want to be a guy. I am one of those people who fall in the middle, and I learned that nonbinary does not have to look like one thing. It was good to see people like me in the media, such as Instagram, and in magazines, where they have top surgery, something I didn’t even know was possible to get without fully transitioning.

I notice problems, [such] as journalists not educating themselves, and not understanding the difference between sex and gender. Being careful to ensure you are not putting a person in a box by using the wrong pronouns needs to be prioritized. Lack of representation in the media has made me turn to social media to feel accepted. We have always been taught there’s “just two genders” and maybe it’s a generational thing, but I have noticed older people at my work still make the mistake of my pronouns or say, “The reality is most people just don’t know and are scared to offend.”

Being from the West Coast—Victoria, where I lived for the first 17 years of my life before moving to Ontario—I learned a lot about myself. In Victoria, there are two newspapers, Times Colonist and Oak Bay News, that I would read regularly, as well as two news networks, CTV News Vancouver Island and CHEK News, that would be on constantly in the background in my house. By no means were there constant appearances of LGBT+ people on the forefront of the media. In contrast, I don’t think this was as much of a problem as it could be made out to be. Whenever there were big events, such as the Pride parade or the occasional protest, they would get a segment in the news and be on the front of the newspaper.

I say that this isn’t a problem because there really isn’t a lot of stigma about being different in Victoria as it is in some other places in Canada. I would say that Victoria is one of most progressive places I’ve ever been to, which is why I don’t think being gay was in the forefront as much when I was growing up because it didn’t need to be taught. Though when I go home and I feel like checking the newspaper, I find that there are more articles about Queer communities. This can be seen as the general trend of progressive news nowadays, but never did I really think that the media in Victoria was behind on their representation of the community.

As a member of the LGTBQ+ community, I find that media coverage on the community can be both positive and negative. I remember reading an article by BBC and the headline was, “The Transgender Family Where the Father Gave Birth.” I think it creates more of a divide. By selectively writing about transgender people having a child, it isolates them. I mean, straight people wouldn’t be making headlines the same way. We’re seen as “different” to journalists.

Don’t get me wrong, the LGTBQ+ community needs to be seen, such as in magazines, because we are people, too, but it should coincide with straight people and not over top of them. We want to be seen as equal, have equal rights, have equal stories written about us, equal love. It’s frustrating, because a lot of media coverage comes our way and journalists think they are writing these progressive stories—but they often cover stories that we would not read.

The only example of a lesbian I saw was Ellen DeGeneres, and she’s masculine and white. When I looked in the mirror, I saw a Black girl in a dress, so I thought I wasn’t gay. Now, because social media has algorithms, I have found other feminine lesbians and see the lives they have created for themselves. Coming from Kingston, I didn’t see a lot of that. Since my girlfriend, Clare, and I created our Instagram together (@clareandfrankie), we have cultivated a sense of community and provide representation for other queer people.

Clare and I travelled to British Columbia this summer, and the most I ever felt comfortable about my sexuality, even just being able to walk down the street holding Clare’s hand, was in Vancouver. The first time I ever saw myself represented in the media was the character Santana from Glee. Seeing her was meaningful, since I was so inhibited by the conservative media I had grown up with. I read an article after Naya Rivera, the actress who played her, went missing. It was called, “Naya Rivera Was the Best Part of Glee,” and I remember the way the writer broke her character down, which allowed me to see myself in her.

There is a quote in Queer communities, and it goes, “You can’t be what you can’t see,” and I think that is something we believe very strongly, which is why I put our relationship on blast on social media, so others can have what we have. I think journalists should try to ensure that queerness is seamlessly integrated into the media. I find it hard to quantify how impactful it is, how many people have messaged me thanking me for making them feel represented in the media, which can be the difference between life and death for some people.

Interviews have been edited for length and clarity. 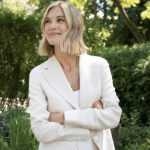 Alexandra Robertson is Contributing Writer at the Review of Journalism.