As COVID-19 devastates small newsrooms, early-career journalists find their futures disrupted right alongside those who precede them. Maybe micro-mentorship is the remedy

As COVID-19 devastates small newsrooms, early-career journalists find their futures disrupted right alongside those who precede them. Maybe micro-mentorship is the remedy

Pacing outside the courthouse, I dialed my colleague’s phone number. The July heat was soaking through the blouse I borrowed from my mom’s closet to cover my first court case. “Remember to write down all of his offences,” my co-worker said over the phone. “For sure,” I responded. Meanwhile I was just trying to figure out which door to use to enter the building.

It was summer 2018, and I’d just finished my undergraduate degree. I had a few months off before starting my Master of Journalism at Ryerson University. In the interim, I interned at The Canadian Jewish News (CJN), a Toronto-based not-for-profit weekly national newspaper. (I’d written an article for the paper earlier that year, and later asked if they had any summer jobs available. Astonishingly, they said yes.) I hadn’t yet stepped foot in a journalism school, or done any real reporting. But for the CJN, I hit the pavement and covered a sexual assault case.

The defendant was a former school teacher who was eventually convicted on three counts of sexual assault, two counts of sexual interference, and one count of gross indecency. Feverishly, I scribbled the details in my notebook as a witness testified that he was sexually exploited from ages 11 – 13, over the course of 30 – 40 incidents. Two more witnesses described similar experiences.

Navigating the courthouse was intimidating. Listening to the victims’ stories frightened me. But the experience of covering a court story without formal training laid the groundwork for a journalism career that I hope will continue to challenge me and allow me to report on difficult subjects.

After court, I returned to the CJN office, unsure of what to do with a notebook full of hideous details. In my first draft of the article, I—having not yet opened a media law textbook—unwittingly included defamatory statements. Instead of belittling my work or quietly correcting my errors, a colleague invited me to edit the piece together at his desk. The CJN facilitated genuine trial and error—nearly impossible to replicate in a typical classroom setting.

Earlier this month, it was announced that the 60-year-old publication was closing. The newspaper’s president, Elizabeth Wolfe, wrote in a farewell letter published on the paper’s website, “The CJN suffered from a pre-existing condition and has been felled by COVID-19.” In 2013, the paper was on the brink of closure, she said, but stayed afloat thanks to a surge of community support, and the difficult decision to downsize. This time, said Wolfe in her note, the goodbye was final.

“Already struggling, we are not able to sustain the enterprise in an environment of almost complete economic shut down. It is with deep sadness that we announce the closure of our beloved CJN, both in print and online.”

The obstacles exacerbated by the pandemic have spread to other publications, too. Torstar eliminated 85 positions across the company, representing about 3 percent of its workforce. Torstar’s board and executive team also took a 20 percent pay cut. They, too, cited COVID-19 for this recent bout of economic instability.

In early April, the 112-year-old Vancouver Courier also ceased publication. Atlantic Canada’s SaltWire Network temporarily laid off 40 percent of its staff and suspended publication of its weekly newspapers in Nova Scotia and Newfoundland and Labrador. (Every weekly newspaper in Newfoundland and Labrador has now temporarily closed.)  The Birds Eye, the only weekly paper on Quadra Island in British Columbia, shuttered at the end of March. The newspaper of record for Nunavut and the Nunavik territory of Quebec, Nunatsiaq News, stopped print production when its printing plant closed. (The paper continues to publish online.) Beyond Canada, Australia’s News Corp media company announced it was closing 60 community newspapers because of COVID-19.

The ramifications extend beyond small newsrooms. CBC suspended its local news broadcasts in mid-March to channel its resources into CBC News Network’s COVID-19 coverage. (After a storm of upset from viewers across Canada who felt overlooked, CBC/Radio-Canada President and CEO Catherine Tait announced that CBC would expand local nightly news segments on CBC News Network by 30 minutes.) Vox Media, the parent company of New York Magazine, The Verge, Sb Nation, and Eater, will be furloughing roughly 110 employees from May 1 – July 31. In a staff memo obtained by TechCrunch, Vox CEO Jim Bankoff wrote, “We’ve already seen a decline in our business.” He noted that this “weakness” was driven by the cancellation of March Madness and the collapse of advertising in travel, sports, and fashion. In essence, depleting resources in other sectors led to a reduction of advertising dollars flowing into news outlets.

In smaller shops, the domino effect is similar. Before the virus, many local newspapers were economically vulnerable, but sustained by advertising revenue from local businesses. With events cancelled and businesses shut down to comply with government-mandated physical distancing measures, these advertisers became burdened with their own financial concerns, and pulled their advertisements from newspapers.

When reporters and editors who have successfully carved out their career paths give advice to eager beginners, they often reminisce about their early days of hands-on experience in small newsrooms, typically outside urban centres. Frequently, the advice is to leave town and work somewhere small, instead of competing for internships at legacy publications in big cities. While great advice in theory, many budding journalists know that these opportunities are increasingly elusive now.

In a larger newsroom, it’s less likely that a summer intern would have covered a court proceeding as serious as the one I was assigned at the CJN. Instead of conducting background research and chasing sources for more senior reporters, I wrote over 30 news articles during my time there, pitched stories, and pieced together a feature.

As I learned that the CJN was folding, I felt a bitter pang of guilt. This closure meant there was one less newsroom willing to take a chance on a young journalist without a j-school degree or past experience—common entries into the industry, which also serve as barriers. Learning to dive into reporting, with the support of a nurturing newsroom, was illuminating for me.

My direct supervisor was the publication’s managing editor, a role that neared the top of the masthead. Yet almost everyday, he pulled a chair beside his desk and we reviewed the article I was working on. He gave me time and patience, both rare virtues in deadline-driven industries where mentorship is slipping away. I often made CP Style mistakes. Instead of criticizing me, he’d circle the word, offer an encouraging smile, and we’d discuss the error as I figured out the correct format.

His exactness toward the cultivation of my skills left a deep imprint on my identity as a reporter.

Many students will soon graduate from their college and university programs within a pandemic, eager for work and experience. Alongside them, there are many ambitious, talented journalists who have not gone to journalism school. There may be fewer summer jobs available at publications like the CJN, but that doesn’t mean that patience, trust, and opportunity should disappear for them. These virtues are not dependent on the physical newsroom, but on the value of knowledge-sharing. With less access to structured mentorship programs, these virtues could be disseminated in smaller, less formal ways.

Perhaps the mechanics of mentorship, or even just compassion for new journalists, might be rethought amongst those who are established in the field—journalists who may be swimming in the freelance pool, too, but who are floating near the top, as well as full-time editors, reporters, and producers who have an abundance of insight. This guidance doesn’t have to be onerous. Responding to a pitch, even just to say that the contributor roster is full or that the pitch isn’t right for the publication—just a single sentence indicating we can take the idea elsewhere—is tremendously helpful. Even better would be a few quick lines of guidance and explanation. If the story was pitched to the wrong section, the editor could suggest another colleague at the publication who might be able to consider it. Being transparent about wage, and paying on time, are also significant reliefs.

For freelancers overloaded with assignments, thinking about who might benefit from having their name passed along to an editor instead could lead to meaningful work. (I know many capable early-career journalists who are efficient and thorough at fact-checking and transcribing.) For magazine editors, taking a chance on a journalist who has a solid feature idea, but little experience to back it, could be the foundation of their portfolio and longform career. Instead of rejecting a story idea that has merit but could use a little reframing, the editor could suggest a different angle. Think of it as micro-mentorship.

This request is not without challenges, especially now. Many established journalists are working from home without childcare. Even well known industry names are in precarious financial situations. This is why I propose small acts of empathy, and not time-consuming commitments. Just having someone to call or text a question to, like I did before entering the courtroom for the first time, can reaffirm a rookie’s instincts and ignite much-needed confidence. The adaptive, dynamic skills of persistence, resourcefulness and meticulousness required to report need to be nurtured. Caring about one another can sustain the integrity and longevity of the industry.

Right now, the upheaval of COVID-19 permeates every physical and intangible space. But maybe there is room for hope. Small acts can have career-altering meaning. In this environment of mass uncertainty, early-career journalists are among those whose paths will be interrupted. Please don’t forget about us. 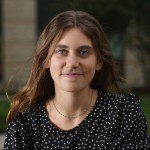